As a 23 years old South London resident with Nigerian roots, director and photographer Gabriel Moses is no stranger to doing things differently and formulating visual tales close to his identity.

Gabriel Moses’ creative journey started just with the age of 18 when he was given the opportunity of a lifetime by Nike to direct a campaign. At the time, the young starlet had only been filming a group of friends under the youtube channel Young Athletes TV however, his career quickly took a turn when he was offered more directing opportunities for the likes of Adidas, Off- White, Mathew Williams, and Converse starring Samuel Ross.

Moncler Voices, a digital campaign only formed in recent years, partnered with the young filmmaker and photographer as one of three young creatives to capture summer.

With a strong focus on family, community, heritage and the diaspora, Gabriel was able to establish himself amongst as an established stalwart of his generation in a short period of time. Far from the Alps of France and Italian luxury ski-wear brand Moncler originally derives its core from, Gabriel envisioned the campaign to be shot in the hot and steamy land of Lagos, Nigeria instead, redefining the use of a Moncler quilted jacket and the ways it could mark as a statement piece even the furthest away of its origin.

Video producer Dawa captioned the process by stating on his instagram; ‘When Gabriel Moses asked me to help him run this Moncler situation, I was
confused. I asked him I said – You want to shoot Moncler winter jackets in Lagos? My guy said – you see them Okada guys with the jackets on? Yeah, that’s the vibe; Well, we got the band back together and done it.’

In the short film, boys of different ages are portrayed in their natural habitat with a twist to it all – wearing the Moncler piece as close as an armour in a sequence of events. What can be interpreted from the visuals is a young boy evolving with a strong sense of individuality. As he approaches adulthood, the young man is confronted by his elder with words of wisdom, which he seems to take with a grain of salt.

In its truest form, the film depicts freedom of expression within the youth culture, which Gabriel Moses can attest to in the length of his career. 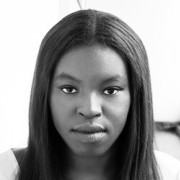